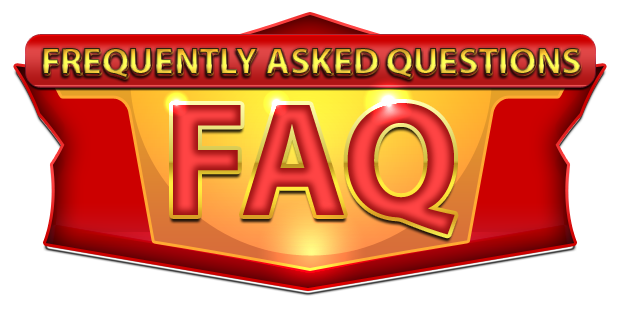 What Makes Video Avatar Pro Different Than Other Video Apps?

There is no question that having a video on your website is one of the must have elements for any business. It has reached the point where you must have a video simple to stay even with your competitors.  VAP takes video to another level. It gives your website a 3D effect that other video apps simply can’t offer.

How Does Video Avatar Pro Work?

VAP moves away from the conventional method of showing videos by embedding it into a website and instead projects the video over the top of the webpage. This not only gives a 3D effect but allows the video to stay in front of the visitor as they scroll up and down your page.

Is it Difficult to Install Video Avatar Pro on a Web Page?

No, it could not be easier. The VAP provides you one small single line of code that you simply copy and paste into the body of your webpage. That’s it. You’re done.

Can Video Avatar Pro be Used on All Types of Websites?

Yes. The only known exception to this is if the website does not use a SSL security certificate. In other words, the site must work with a URL that can start with HTTPS:// as opposed to just HTTP://.  If the your site does not use SSL, then for more reasons then I can list here I strongly suggest you rectify that. It can be done for less then $5.00/yr and most Hosting services now offer it for free and is automatically enabled when you host your site with them.

What is a “Demo Link” and How Does it Work?

VAP offers two types of Demo links. Both work in the same way but are used in different ways. The regular Demo Link you can use to create a link pairing your video to most any website. When the link is put into your browser it shows your video playing over the top of that website even if it is not your website. Although the video itself can still be used with any website you place the script in.

The Master Demo link works much the same way only it takes a video you designate in your account and allows you to create multiple links on the fly to play over many different Websites.

Does the “Demo Link” Play Over All Websites?

What Type of Video Does Video Avatar Pro Require?

If you want to make your own custom video to use in VAP it must be rendered in MP4 and using what we call Chroma Key, or Green Screen effect.

Where do I Go to Get My Own Custom Green Screen Videos Made?

If you feel you need something beyond the dozens of videos we provide you there are a few options. To get both the Green Screen video made along with a Professional Actor to make the video for you I would suggest looking at Fiverr.com. We offer more details on this in our Private Members area.

Is Getting a Custom Green Screen Video With a Professional Actor Expensive?

No not at all. To hire a very good Professional Actor to create a one-minute video, you can expect to pay around $50 to $100.  We offer more details on this in our Private Members area.

Can I get Green Screen Videos of Myself or With My Clients in Them Done For Me?

Yes of course.  We offer more details on this in our Private Members area.

Can VAP be used in Affiliate or Network Marketing?

Actually yes. We have come up with some rather interesting strategies on how VAP can be used in Affiliate and Network Marketing. Details are in our Private Members area.

Yes, if it is rendered in MP4 format and has a Green Screened background it will work.

How Long Can My Video Be?

Does Video Avatar Pro Work on All Browsers?

It has been tested and found to work on all major brands people use such as Chrome, Firefox, Safari, and Edge.

The one possible exception to this would be Internet Explorer.  This is because of the advanced technology used to make VAP work simply is not supported in IE.

Statistics show that now less than 2% of people still use IE and Microsoft is quickly phasing it out in favor of Edge.

For us to make VAP work in IE we would have to “dumb it down” to a point where it possibly could have affected its performance in other browsers. A sacrifice we were not willing to make for the sake of outdated technology that is already being pushed out the door.

From tests I have ran I found that page load speed is slightly effected but not as much as it is with an embedded YouTube video.

Here are the results I came up with testing it on a Test WordPress site residing on a cheap shared hosting service giving us the worst case scenario. Overall load speed is not impressive but the differential is what is important.

Do I Need to Pay Extra For an “Agency” or “Developer” License?

No. VAP as it stands, is totally white labeled. That means there is nothing in our script, links, or emails sent out from our application that will give your prospects or clients any clue leading them back to us.

They might hear about us through other means, but we have no control over that.

Unlike most other services you might use, the white labeling they call an “Agency” or “Developer” license comes at no extra charge.

We offer a no-hassle 30-day money-back guarantee.  Details on this can be found on our Refund Policy Page.

Are There Any Restrictions on the Content of the Videos?

Nothing more then what common decency dictates. We will not condone VAP being used for nudity, pornography, or anything showing the exploitation of anyone or anything. Also, we will not condone blatant and obvious hate speech.  We will shut down your account immediately and without warning if we find you using it in this manner.

This policy will be guided by common sense and decency.

How Easy is it to Create a Video Project? 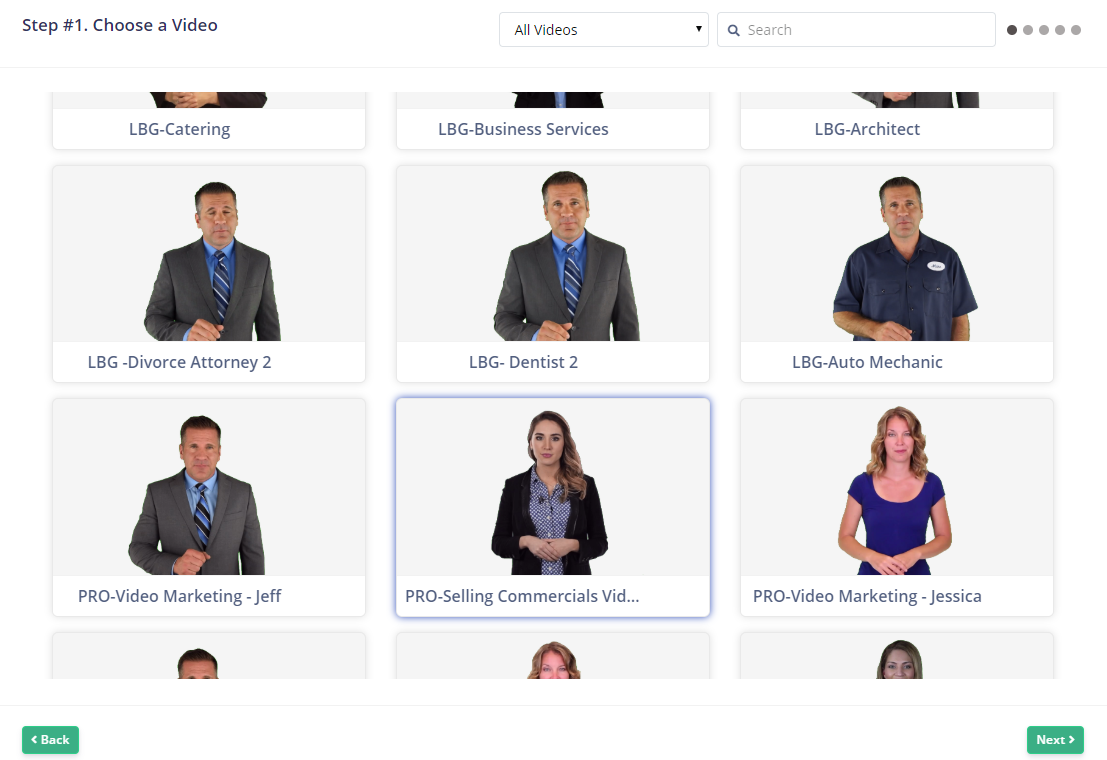 STEP 1: Select Video You Want to Use or Upload Your Own. 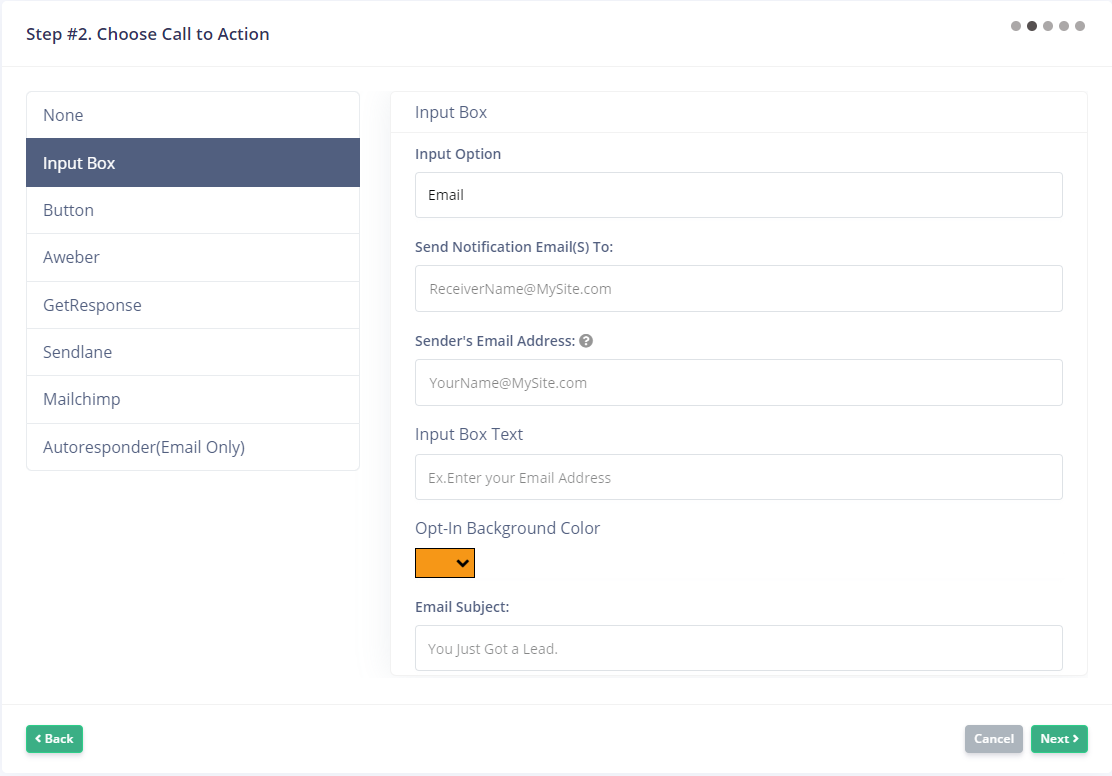 STEP 2: Choose Your Call to Action 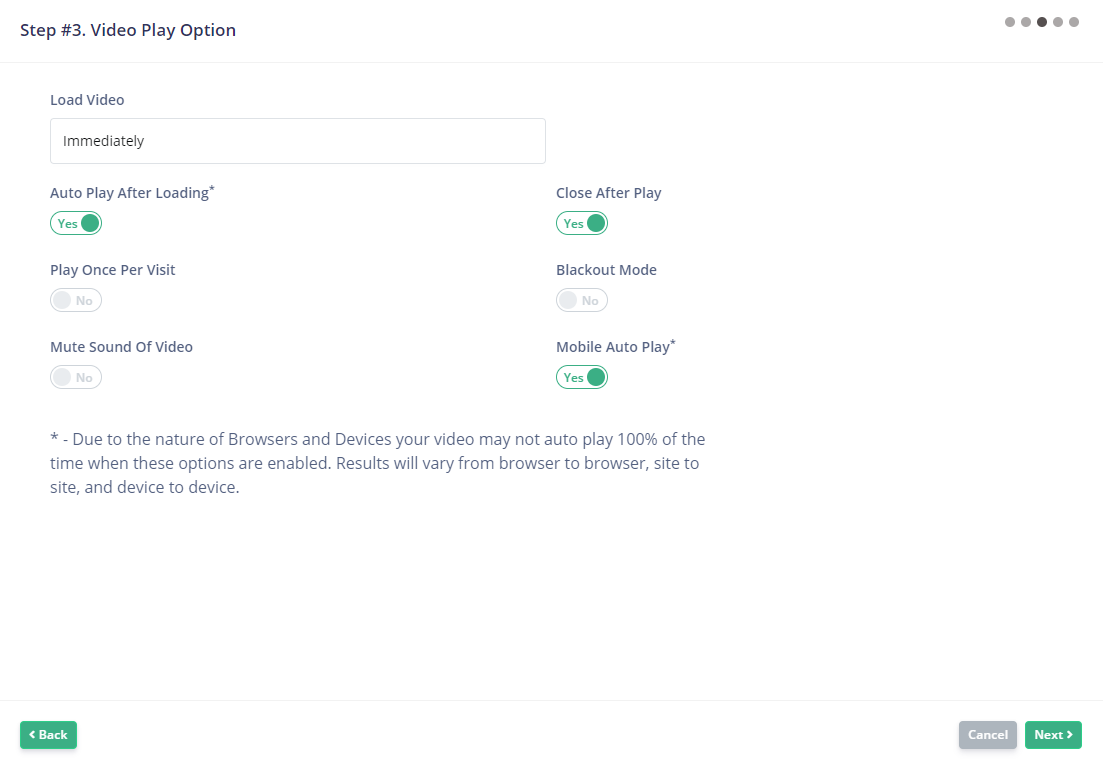 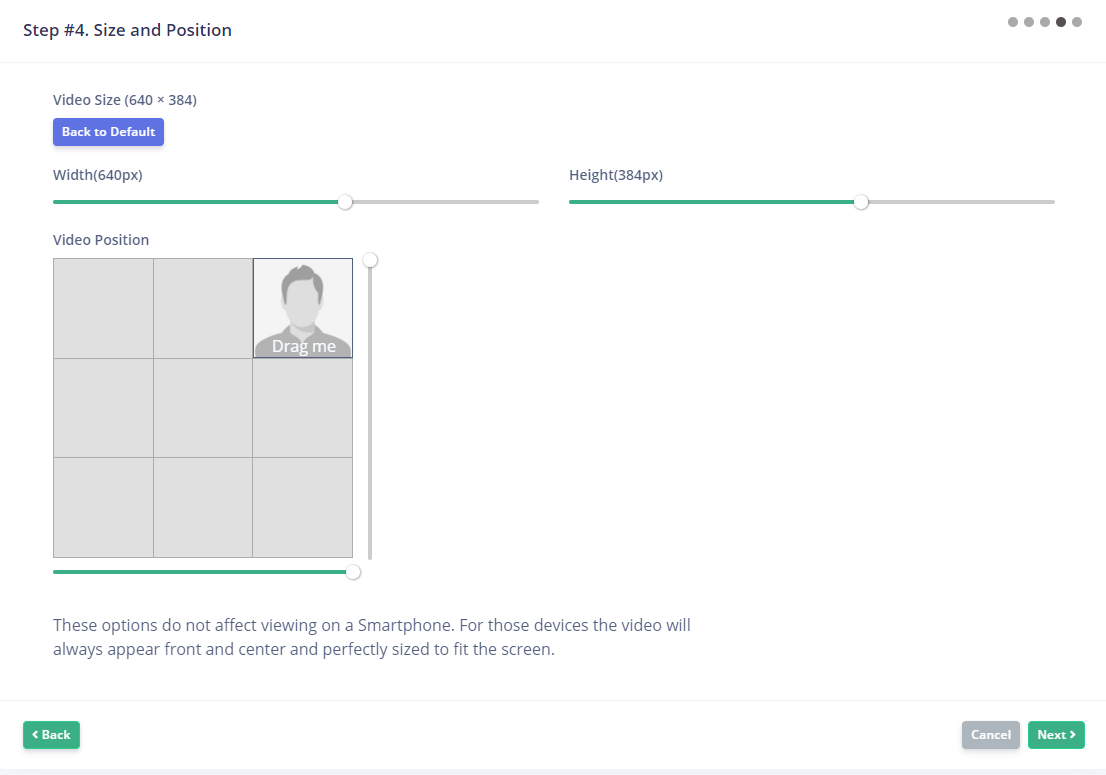 STEP 4: Adjust Size and Position of Your Video 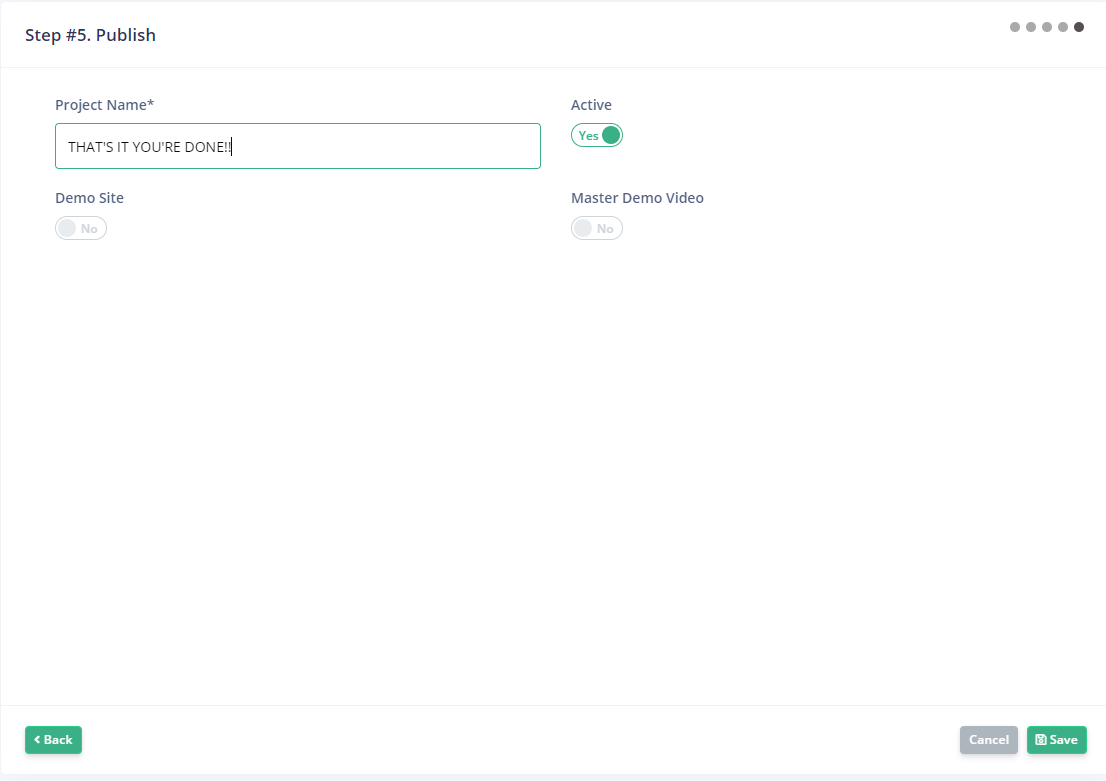 STEP 5: Name Your Project, Save and You Are DONE!

STEP 1: Select Video You Want to Use or Upload Your Own.

STEP 2: Choose Your Call to Action

STEP 4: Adjust Size and Position of Your Video

STEP 5: Name Your Project, Save and You Are DONE!

1 Year for the Price of 10 Months
$599.50/Year
Purchase
We use cookies on our website to give you the most relevant experience by remembering your preferences and repeat visits. By clicking “Accept”, you consent to the use of ALL the cookies.
Cookie settingsACCEPT
Manage consent

This website uses cookies to improve your experience while you navigate through the website. Out of these, the cookies that are categorized as necessary are stored on your browser as they are essential for the working of basic functionalities of the website. We also use third-party cookies that help us analyze and understand how you use this website. These cookies will be stored in your browser only with your consent. You also have the option to opt-out of these cookies. But opting out of some of these cookies may affect your browsing experience.
Necessary Always Enabled
Necessary cookies are absolutely essential for the website to function properly. This category only includes cookies that ensures basic functionalities and security features of the website. These cookies do not store any personal information.
Non-necessary
Any cookies that may not be particularly necessary for the website to function and is used specifically to collect user personal data via analytics, ads, other embedded contents are termed as non-necessary cookies. It is mandatory to procure user consent prior to running these cookies on your website.
SAVE & ACCEPT